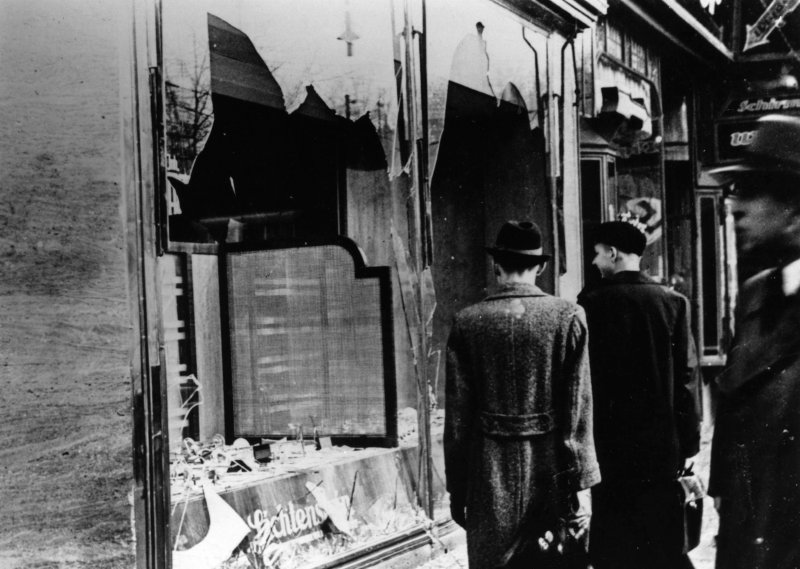 Eighty years ago, on the night of Nov. 9-10, 1938 — known as Kristallnacht, the night of broken glass — synagogues were set on fire, store windows were smashed and Jewish homes broken into in cities, towns and villages across the Third Reich. Fire fighters and police stood by, instructed only to intervene if neighboring “Aryan” property were endangered. Over the following days, adult male Jews were arrested and incarcerated in local jails and makeshift prisons, and some 30,000 were deported to concentration camps. Hundreds were killed; faced with devastation and total ruin, dozens committed suicide. It was clear that Germans and Austrians of Jewish descent had no future in their own homeland. Some managed to emigrate, abandoning property, family and friends; those left behind would later find themselves deported to the extermination camps in the east.

Recounting it like this, in the passive voice, highlights the violence that was perpetrated against Jews. And at this anniversary of such a tragic event, it is right that we remember the victims.

But who was responsible? And what lessons can we learn today, in the wake of the fatal attack on Jews in the Pittsburgh Tree of Life synagogue?

The November terror was instigated from above, sanctioned by Hitler and unleashed by Goebbels. The major perpetrators were the obvious Nazis — the black-booted SS, the brown-shirted SA, the idealistic Hitler Youth, the members of affiliated organizations proudly flaunting swastikas and party badges. This is what most people have in their minds as the image of the Third Reich.

Yet the responses of the wider population also made it possible — and this is what must still give us cause for thought today.

Large numbers of ordinary people, including women, were involved in looting and plundering, picking up goods thrown out onto the street and benefiting from the expropriation of Jewish property. Both young and old turned out to humiliate Jews, with whole classes of schoolchildren brought by their teachers to see sites of smoldering synagogues and join the jeering crowds. While some were egged on by peer group pressure, many young people believed the Nazi view that the “Jews are our misfortune” and that it was “time to put them in their place.”

Other people, however, were heard to mutter that they were “ashamed to be German,” and were critical of the violence against people and the destruction of property. Such comments are reported in many contemporary sources and eye-witness accounts from across the Reich.

But why did so few stand up to protest? Why did bystanders remain largely silent, passive?

First, there is the obvious point about state-ordained terror and fear. If violence is initiated from above, in a state where active political opposition has been crushed, it is extremely difficult to engage in effective resistance. Many political activists had already emigrated, often after early spells in concentration camps, some seeking to fight on as best they could from abroad. After years of repression, most dissenters were cowed into sullen silence. In November 1938, though some individuals still managed to provide surreptitious assistance, many who feared severe penalties remained passively on the sidelines, whatever their sympathy for the plight of the persecuted.

But there is also a more complex point to be made, about longer-term compliance with a prevailing climate of hostility toward those officially disparaged as the “other.”

By 1938, with Hitler in power for over five years, the majority of non-Jewish Germans had accommodated themselves to living under the Nazi regime. Significant numbers were enthusiastic supporters of Hitler and his proclaimed return to national greatness; many more joined the Nazi party (NSDAP) or affiliated organizations for opportunistic reasons. Others compromised less willingly, performing new roles in public and muttering disagreements privately, but fearful of being denounced if they stepped too far out of line.

Whether through longstanding or newly acquired conviction, or through coerced conformity, people excluded Jews from their social lives, their friendship circles and their leisure associations, and lost contact with Jews who had been thrown out of their professions and forced to move homes. With increasing social and physical separation between communities, “Aryans” — members of Hitler’s spurious “master race” — lost contact with the excluded “non-Aryans.” And with growing ignorance of their deteriorating situation came a learned indifference to their fate.

This creeping compliance in effect amounted to complicity.

Put simply: the Nazi leadership had introduced a hostile environment and initiated practical measures, whether through legislation or violence, to establish an ethnically defined “people’s community.” By being largely compliant, for whatever reasons, those who were not excluded had helped to create an even more hostile environment – one in which it was possible to carry out terror in broad daylight without significant unrest or intervention on behalf of the persecuted.

In western democracies today we do not have state-instigated violence of the sort or on the scale unleashed by Hitler. But stereotyped prejudices are nevertheless often legitimated from the top, accompanied by whipped-up fears of supposed dangers to the in-group community, in a context where active minorities are not only prepared to engage in violence but also have the physical means to do so. The lessons of Kristallnacht — about the need for informed vigilance, non-compliance with prejudice and sustained empathy with fellow human beings — remain all too relevant.

Mary Fulbrook is Professor of German History at University College London and author of Reckonings: Legacies of Nazi Persecution and the Quest for Justice, published in October 2018 by OUP.Subscribe to TIME

“All the war-propaganda, all the screaming and lies and hatred, comes invariably from people who are not fighting.” ― George Orwell